Improved trade and global growth estimates are cause for cautious optimism, officials at the International Monetary Fund (IMF) Spring Meetings said last weekend, while urging countries to adopt structural reforms to boost growth and reduce unemployment. The Washington gathering – which focused primarily on how to transition from recession-era policies to those of a more normal period – also reviewed the ongoing efforts to enact reforms to the lending institution, giving the US Congress until year’s end to ratify the measures.

The International Monetary Fund tends to be too upbeat when projecting the economic growth of countries that receive large loans, an internal audit found.

In a report that looks at IMF loan programs between 2002 and 2011, the auditor found that “the forecast bias at program inception was optimistic and significant” for nations that could borrow more than their size at the fund would allow under the “exceptional access” rule.

“This fact may explain the generalized public perception of the optimistic bias: exceptional access arrangements have, over the years, received considerable media attention,” the Independent Evaluation Office said in its report dated Feb. 12 and released today.

The fund in recent years said that it miscalculated the impact austerity policies would have in euro-area countries and has since eased its conditions, for instance, by giving Portugal more time to meet its budget-deficit targets.

The report also looks at the IMF’s global forecasts, or World Economic Outlook, which are published twice a year for all member countries.

“By and large, country officials have confidence in their integrity,” the auditor said of IMF forecasts.

Over the 1990-2011 period, on average the IMF tended to overpredict gross domestic product expansion and undepredicted inflation because of regional or global depressions. Overall the forecasts’ accuracy were comparable to that of private-sector economists, the IEO found.

“Macroeconomic forecasts are critical inputs not only for the IMF’s bilateral and multilateral surveillance, but also for our program negotiations and the assessment of global risks, vulnerabilities, and spillovers,” IMF Managing Director Christine Lagarde said in a statement.

STORY: Ten Expert Economists’ Wild Guesses About the World of 2114

“I agree with the IEO that we should further strengthen the learning culture in the fund, including by enhancing our learning from past forecast errors, keeping up with advances in forecasting approaches and implementing the recommendations of external evaluations of IMF forecasts,” she said.

“We will be revising upwards the global forecast of the economic growth,” she told a press conference in the Nairobi, adding that it would be premature to say any more.

Ms Lagarde, who was wrapping up a two-day visit to Kenya, gave no reason for the revision.

When it issued its latest World Economic Outlook report in October, the IMF lowered its forecasts, saying that global growth “remains in low gear”.

It said it expected the global economy to grow 2.9pc year-on-year in 2013 and 3.6pc in 2014. That represented a downward revision of 0.3 and 0.2 percentage points, respectively, from its July estimates.

Emerging market economies, although still accounting for most global growth, were losing more momentum than previously thought, the IMF said in November, although advanced economies, in particular the US, were showing signs of picking up.

The fact that the US Federal Reserve has started to change the easy-money policy it had been pursuing has had the effect of slowing capital inflows to emerging-market economies as long-term yields in the US and many other economies have risen, Ms Lagarde said.

The IMF chief dined with Kenyan President Uhuru Kenyatta on Monday evening in the coastal city of Mombasa.

Her visit came a month after the final disbursement of a three-year, $750m support loan for Kenya that had backed major restructuring of economic policies and strengthening of the government’s financial position.

cAmerica steps back from the “fiscal cliff” (or “kicks the can down the road”, to use perhaps a more appropriate metaphor) and the world’s stock indices, from the Hang Seng to the Dow Jones, soar to their highest level in months. Cynical Cassandra is not impressed. As The World in 2013 argues “the world economy’s woes are far from over“, with only the emerging economies (a phrase that now seems to cover countries that have long since emerged—witness China, second only to America in economic weight) promising robust growth for the coming year.

But it would be churlish for me to be so negative at the start of a year, so let me direct readers to another, more cheerful, part of The World in 2013: the list of the world’s ten fastest-growing economies. 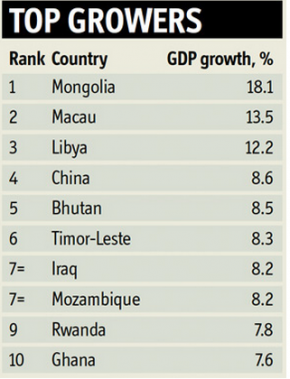 The star performer will be Mongolia, followed by Macau. Both should give thanks to China (number four on the list): it is China’s demand for Mongolia’s minerals that is powering its economy; and it is Chinese gamblers who fill the casinos of Macau. China apart, the list consists of economies too small to move the world’s stock indices. But do they have attractions that size cannot measure? Bhutan (at number five) is undoubtedly beautiful and is blessed with hydroelectric power, and, now that their various wars or periods of political insurrection are over, there are surely advocates for Timor-Leste and the East African duo of Mozambique and Rwanda.Ghana, a model of stability in West Africa, has lots of fans—and promising oil reserves, too. Libya (number three) and Iraq (equal seventh) both have a lot of oil but not exactly great stability. The sad thing, however, is that (unless my eyes deceive me) of the fastest growing economies only China—ranked 49th—makes it into the 80 countries in The World in 2013′s list of the best places to be born this year. At the risk of sounding heretical to readers of The Economist, economic growth is clearly not the be-all and end-all of life…

The core mission of the International Monetary Fund (IMF) is to help stabilize an increasingly global economy. The IMF’s original goals were to promote orderly and stable foreign exchange markets, restore free convertibility among the currencies of member nations, reduce international impediments to trade, and provide assistance to countries that experienced temporary balance-of-payments deficits.

Over the years, the IMF has shifted its focus from exchange rate relations among industrialized countries to the prevention of economic instability in developing countries and countries from the former Eastern European bloc. The Mexican economic crisis in 1994 prompted an unprecedented bailout of $47 billion and launched the recent trend of providing rescue packages to major economies in the developing world. In the past several years, the IMF approved a $19 billion rescue package for Turkey and led a $17.2 billion rescue for Thailand, a $42 billion package for Indonesia, and a $41.5 billion deal for Brazil. South Korea got a whopping $58.4 billion when it was on the verge of bankruptcy. These rescue packages helped stabilize the respective economies and avoid total economic collapse of the countries involved.

For more information about the IMF, check out the link on the student companion website at http://www. cengage.com/ marketing/gillespie.

To qualify for assistance, the IMF may require that countries take drastic economic steps, such as reducing tariff barriers, privatizing state-owned enterprises, curbing domestic inflation, and cutting government expenditures. Although many nations have resented such intervention, banks worldwide have used the IMF as a screening device for their private loans to many developing countries. If countries qualify for IMF loans, they are considered for private credit. A growing world economy in the early 21st century resulted in fewer crises for the IMF to manage. Its loan portfolio fell to the lowest level since the 1980s, and its influence over countries and their economies diminished.