When queried at a 1909 business meeting about the choice of colors available for his automobiles, Henry Ford replied that customers could have any color they wanted as long as it is black. Fast forward to the late 20th and early 21st centuries and consumers today are now in the driver’s seat (no pun intended). Publications such as Consumer Reports, CNET, and a myriad of other independent professional and consumer reviews of goods and services empower buyers, dictating to producers the style, features, and price ranges that consumers seek.

END_OF_DOCUMENT_TOKEN_TO_BE_REPLACED

A Philanthropic Awakening in Latin America

For a long time standing now, “Latin American philanthropy” has been considered an oxymoron. Traditionally, wealthy Latins and corporations have had deep pockets but short hands, believing it the role of the public sector to fund charitable and philanthropic endeavors while keeping their own wealth in the family, shipping it offshore or giving it to the Church.

The times they-are-a- changing, however; for without much fanfare we are witnessing a growing awareness among the wealthy and corporations–principally through corporate foundations in the region–that philanthropic giving and social engagement are critically important and highly beneficial for their nations, to society, their companies and themselves. (It should be noted that most countries in Latin America use the term “private social investment” rather than philanthropy.)

END_OF_DOCUMENT_TOKEN_TO_BE_REPLACED

To devalue or not to devalue? That is the question. During the last decade, Latin American central banks have effectively steered the rudder of monetary policy, avoiding major devaluations of their currencies–with the exceptions of Argentina and Venezuela.

Recognizably, there have been incremental devaluations in the region as a country may devalue its currency to combat trade imbalances. Chile and Peru are examples. Resultingly, a nation’s exports become less expensive and, therefore, more competitive in global markets; imports become more expensive, making domestic consumers less likely to purchase them.

While currency devaluation may appear to be a wise economic policy choice, it can surely have negative consequences. The result of imports becoming more expensive has the effect of protecting inefficient domestic producers. Higher exports relative to imports can also increase consumer demand and fuel inflation. In the case of industrial buyers from emerging markets that need imported machinery and other capital goods to produce for either the domestic or export market, currency devaluations imports more drive up the prices for their customers, squeeze their profit margins and, in the aggregate, contribute to inflation.

The “perfect storm” of a drop in oil prices, a slowdown in the Chinese economy, and sluggish consumer and industrial demand in industrialized nations is whipsawing Latin American economies, especially large commodity producers such as Argentina, Brazil, Chile, Colombia, Mexico and Peru. Not surprisingly, Latin American GDP is expected to grow less than 1% in 2016 with Brazil and Venezuela continuing to post negative growth rates. There is nothing on the horizon to seriously challenge this doom-and-gloom scenario.

Rather than address the real causes of economic conditions that trigger currency devaluations and respond with viable remedies, political leaders often turn to scapegoating–usually casting the blame on other nations. For example, in September 2010, Brazil’s Finance Minister, Guido Mantega, used the term “currency war” with reference to monetary policies implemented mainly by China, Japan, Thailand, South Korea, Colombia and other countries to generate an artificial devaluation of their currency in order to achieve a cheaper, more competitive domestic economy that may be attractive to foreign investors, as well as to be able to withstand the 2008 economic crisis.

More recently the term “currency manipulation” has been bandied about, most prominently among a number of U.S. presidential candidates. These contenders assert that China, specifically, undervalues its currency to gain an unfair advantage in global trade. However, devaluation and revaluation are the prerogative of sovereign monetary authorities. The U.S., in fact, manipulates its own currency through interest rate manipulation. As economist Matthew J. Slaughter points out, in today’s globally networked economy trade competitiveness tends to vary little with the movement of any one currency.

Admittedly, however, the decline in China’s yuan is fueling turbulence in financial markets across the world and could well unleash a cycle of competitive devaluations of currencies. How would a series of currency devaluations impact Latin America’s private sector? Large corporations such as JBS, Cemex, Argos, Techint, and Cencosud have the wherewithal to weather economic recession and financial volatility, while small companies, especially microenterprises, that struggle for survival in even good times will find the business environment even more challenging. But what about new businesses? Given the explosive growth of new business formation (NBF) in emerging markets, particularly Latin America, and the emergence on technology-based entrepreneurial ecosystems in major metropolitan areas throughout the Hemisphere, this question is of special importance.

In a recent study, colleagues at Colombia’s EAFIT University and I examined 30 emerging markets, including a number from Latin America, during a seven-year period to determine the impact of devaluation on NBF. We found that while devaluation clearly boosts NBF, the effect is not lasting over time and loses significance after two years–even sooner if a country’s competitiveness is not strong to begin with.

Should the next twelve months witness a resurgence of growth in China, a reversal in commodity prices, and faster economic growth in Europe and the U.S., currency devaluation as a monetary prescription will be relegated to the back burner of economic policy.

That will surely make 2016 a happy new year for Latin America.

Jerry Haar is a business professor at Florida International University and a Global Fellow at the Woodrow Wilson International Center for Scholars in Washington. He is also a research affiliate of the David Rockefeller Center of Latin American Studies at Harvard University.

North Americans begin getting to know people by asking a lot of questions. In Latin America, it is safer to talk about local or regional topics. Personal questions are often interpreted as prying. 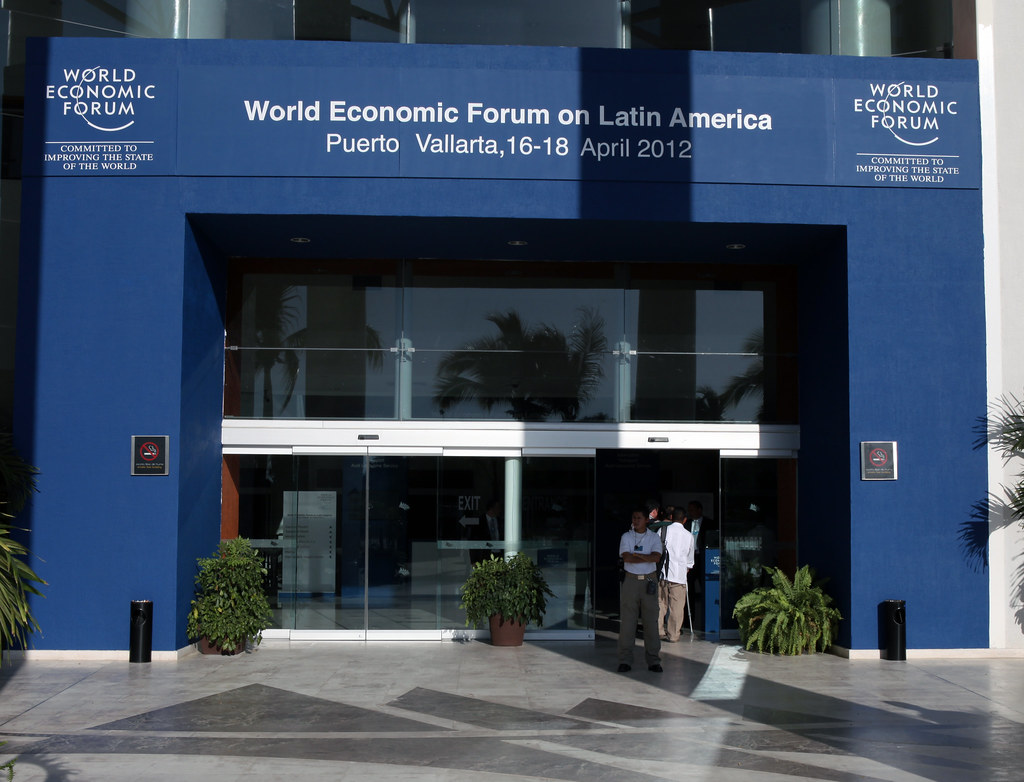 April 18, 2012 marks the end of the World Economic Forum on Latin America 2012 in Puerto Vallarta, Mexico. It concluded with a call to end “archaic thinking, outdated notions of hierarchy and the lack of dedication to excellence in education,” while promoting a “commitment to education, inclusion, social responsibility and sustainable growth” amongst young leaders.

For Latin American businesses to thrive in the global economy and in environments where there is distrust or even hostility towards private enterprise, they must be solidly focused on engaging stakeholders and incorporating the communities in which they operate into their business models. With Latin American student performing poorly in educational benchmarking assessment, the importance of raising the quality of education amongst these countries was made. In addition, the role of the Internet, social media and other communications technology was strongly emphasized. They are means that are becoming essential for stakeholder engagement and for creating conversations between people.