Cultural awareness is key in any international business activity.  Cultural divides should be accounted for in marketing, negotiations, product design, and other important decisions.  One must analytically consider the best way to promote a product given the target audience.

It is argued that differences among cultures can be explained according to four dimensions of culture:

1. Individualism – “I” consciousness vs. “we” consciousness
2. Power Distance – levels of equality in society
3. Uncertainty Avoidance – need for formal rules and regulations
4. Masculinity – attitude toward achievement, roles of men and women 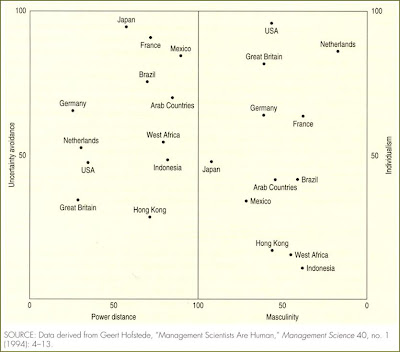 This figure shows the cultural dimension scores of 12 countries.   Japan, for instance, shows the highest Uncertainty Avoidance score and thus might be receptive to such risk-reducing marketing programs as return privileges and extended warranties.  Since individualism is highly regarded in the US, promotional appeals the promise empowerment might be enticing.  In Arab countries where Power Distance scores are high, consumers may respond well to promotions that imply social status.

Doing business in other countries requires cognizance of the cultural divide.  An international manager must think analytically to eliminate any self-reference criterion, which is the unconscious reference to one’s own cultural values.  This is the root of most international business problems.

Understanding culture requires constant monitoring of changes caused by outside events and by the business entity itself.  Resisting ethnocentrism – thinking one’s own cultural is superior – is also important.  One must be careful not to measure other cultures with one’s own cultural barometer.

Some times a Long-Term vs. Short Term Outlook dimension also has been considered.  Asian countries score highly on this dimension, while most Western countries do not.  This may help explain why the Japanese tend to evaluate marketing decisions based on long-term market share rather than on short-term profit motivations.